Thanks to everyone who came out for October’s Cheese Night at FAP Central!

We had a great line-up for the night, and I’m happy to share October’s cheese selections with everyone who wishes to expand their knowledge and their palettes. 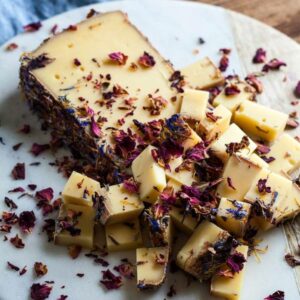 This cheese is made from the milk of Swiss brown cows who graze in the “Hay Belt” of the Alps, a region encompassing Southern Germany, Western Austria, and Eastern Switzerland. The cheese’s flavor is apt to change depending on what grows in the grass this year, so it was thought to commemorate the spring wildflowers of this region by incorporating them into the rind. Alp Blossom is created and the aging process is begun at Austria’s first cheese maker’s, Sennerei Huban, but it is sent to a cave in Bavaria to age. This art of aging cheese in caves other than the farms they begin at is called “affinage.”

The showy exterior of Alp Blossom is reflective of complex flavor profile of its interior. The flowers bring their own variety of spice, sweet, and umami. The “base” of Alp Blossom is like Gruyere in it’s butteriness (also from the high fat content of the cow’s milk), nuttiness, and round flavor that coats the mouth. When I was shown this cheese by the purveyors at Di Bruno Bros, I wasn’t impressed by it’s showiness, but when I tasted it, I fell in love with its complexity.

You can pair this cheese with a Hefewiezen or a Reisling. The cheesemonger at Di Bruno Bros recommends a gin and seltzer cocktail muddled with the dried flowers from the rind. (Ask your cheesemonger if there are any extra dried flowers you can have for presentation or cocktails.)

I would eat this cheese by itself. It’s so good! 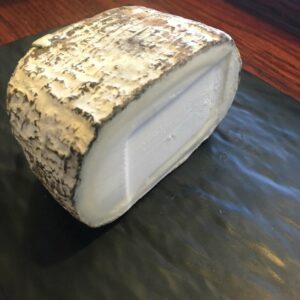 pomThis is a spanish goat cheese made by the premier cheese maker, Rafael Baez, and his daughter, Paloma. This cheese is truly unique, and there is no other cheese like it anywhere (at least to my knowledge!). It is reminiscent of a buche de chevre in that it is a living rind log – only is a living rind made with the mold penicillin Roqueforte (popularized by Roqueforte cheese). The genius Baez coats the outside of Monte Enebro with penicillin Roqueforte instead of injecting the cheese (as is done with blue cheese) to create this “new-age” Spanish cheese. The rind also contains vegetable ash which was often used to protect cheese as it aged. This helps to produce the grey color of Monte Enebro’s rind.

I almost hate to pair Monte Enebro with any drink because I feel any beverage would take away from it’s uniqueness. The internet suggested a Sour beer or a Spanish dessert wine; I think I would opt for Monk’s Flemish Sour and see how it goes.

I would eat this cheese with dot of honey. You can go crusty bread or cracker as a vehicle. 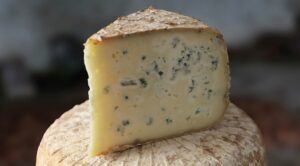 Bleu des Basques is a sheep’s milk blue that hails from the Pyrenees. It is everything you would expect from a bleu cheese. This cheese was very popular in the late 70’s and early 80’s so that the farms of the region formed a co-op in order to match the demand for the sheep’s milk. Since 2001, the cheese is more prominent in stores. Profits from these cheese are (still) shared with generational families of shepherds of the region. Fancy that!

Bleu des Basques is an accessible blue cheese – not too much of a punch. The extra fat in sheep’s milk helps to tame the beast of penicillin Roqueforte. This is a reason you will see Bleu des Basques “sweat” as it becomes room temperature – the droplets of fat from the sheep’s milk are coming to the surface of the face of cheese where it is cut. (So you don’t want to wrap this cheese in saran to store it. Instead, cover this cheese with loosely wrapped paper or a dome when storing to prevent the mold from infecting any other foods close to it.)

The profile of this cheese rounds from salty to sweet and creamy to spicy with acid in taste that coats the mouth. In other words, if you eat a lot of it, then expect your lips to tingle a little and the ghost of its flavor to haunt your mouth for at least an hour. This bleu has a crunch due to the calcium lactate crystals that form when as cheese ages. I love cheese that crunches! It’s such a textural surprise.

You can pair this cheese with sweet wines (Sauternes). I might try a Piraat with this cheese and see how it goes or perhaps a Saison. Something fruity, perhaps.

I would take a date and stuff it with this cheese. I would take a dried apricot or fig and do the same, or press a dried cherry or two into it upon a cracker. I would drizzle honey on the top (especially honey from the Pyrenees) or crumble a little overtop a burger. You can go crusty bread or cracker.

Thanks again to everyone who participated in cheese night. We look forward to seeing you again in November!

Be sure to check out or latest edition to the FAP site, Kaffe's Korner! Click the button below...